Between the large stack of papers to mark and an increasingly nocturnal ten-month-old, the planned post on microhistory has had to be postponed until the new year. However, the season calls for at least one celebratory tribute to the peculiarities of early modern Christmastide. The case of Oliver Cromwell and the mince pies has already been discussed at length elsewhere, so I suppose I’d better share another serendipitous discovery from the archives.

This time of year had long been a season of charity and hospitality. As Ronald Hutton has shown, the Twelve Days of Christmas were an occasion for feasting but also giving. He quotes Thomas Tusser, the sixteenth-century poet-farmer:

At Christmas we banquet, the rich and the poor,
Who then (but the miser) but openeth his door.1

The ‘better sort’, ranging from well-off villagers to the richest nobles, showed their generosity by inviting neighbours to dine with them and by giving alms to the poor. Or at least that is how it was supposed to work.

But a court case from Devon suggests that the season was not always so jolly. Here it seems a failure of seasonal good spirits had dire consequences. Sarah Byrd of Luppitt, testifying in 1693, tells the story:

a little before Christmas last … Dorothy East came … and begged an Almes of [me] against Christmas, but [I] told her that [I] designed not to give any thing to such poore people as had monethly Relief of the parish, neither should shee have anything; upon which [Dorothy] East in a discontented manner said, That it should be better for her if [I] had given her something, and told [me] that [I] should gett nothing by it, and soe departed … in great discontent, and [my husband] John Byrd in a few dayes after this had very ill fortune with his Cattle, soe that [I] doeth believe that [Dorothy] East might doe them some mischief.2

Whilst the immediate outcome was only a few sickly cattle, the long-term result was much more severe, for this testimony was just one in a series of depositions from nine witnesses claiming that Dorothy East was a witch.3 And the charge of witchcraft, even in the late 17th century, carried the death penalty.

The bitter quarrel between Sarah Byrd and Dorothy East is an almost perfect fit for the model of witchcraft accusations established by Alan Macfarlane and Keith Thomas back in the 1970s: a poor individual makes a traditional request for charity from a neighbour, but the neighbour no long supports direct informal giving and thus refuses, leading to harsh words and eventually an claim of witchcraft.4 The fact that it took place on Christmas is perhaps just a sad coincidence.

I haven’t found any evidence of the ultimate result of this trail – it is quite possible that Dorothy East escaped her accusers and survived to pester her neighbours for many Christmases to come. What is clear, however, is that a Scrooge in seventeenth-century England had to worry about more than just harassment from harmless ghosts. Greedy misers also had to be on their guard against vindictive witches. 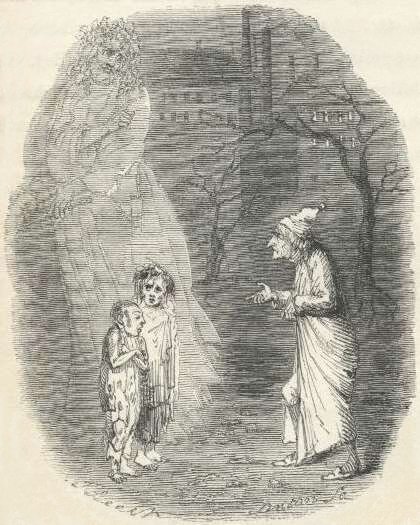 Look out, Scooge! They might be witches! (from Charles Dicken, ‘A Christmas Carol’, 1843, via wikisource)

2 Devon Record Office, QS/4, box 134 (informations of Joseph Thomas et al. 26 August 1693). Note that I have changed this from third-person to first-person for clarity.

3 I belatedly noticed that Pamela Sharpe also discovered East’s case. She provides details of some of the other accusations against East in her Population and Society in an East Devon Parish: Reproducing Colyton, 1540-1840 (2002), p. 223 (available on googlebooks).

3 thoughts on “A seventeenth-century Christmas: mince pies, jollity and witchcraft”