One sunny afternoon last July, the University of Birmingham’s Edgsbaston 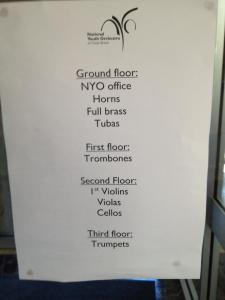 campus played host to some rehearsals by the National Youth Orchestra of Great Britain.  Cellos, violas, tubas and trombones were scattered liberally throughout the Arts Building, and the history department itself played host to the trumpet section.  Hearing (fainter) strains of music in the department is not an uncommon occurrence, as there are student rehearsal rooms in other parts of the building.  This is usually quite enjoyable, even if it occasionally adds a melodramatic quality to meetings or supervisions.  Whether at work or home, we have all probably at some stage encountered some form of music which has permeated our environment uninvited.  Sometimes, as with the NYO or Birmingham’s budding undergraduate virtuosi, this can be an unexpected source of pleasure.  But in other situations, it can be distracting, disruptive, or downright offensive.  Uncleanness, the anthropologist Mary Douglas famously observed in her 1966 work on Purity and Danger, is ‘matter out of place’.[1]  In the same way, musical sound in the wrong spatial or chronological context can easily cross the rubicon of taste and order and become a provocative and clamorous noise.  If this is still true in the sound-proofed, double-glazed, cavity-wall insulated, noise-cancelling-headphone-wearing twenty-first century, then it was even truer in the sixteenth, where both welcome and rogue sounds must have travelled with much greater volume, clarity and conspicuousness.

All of which is but a brief prelude to the real subject of this blog entry: musical Sabbath-breakers in Tudor Lancashire.  While dignified observance of the Sabbath was by no means a reformation  invention,[2] the sixteenth century did see an increasing emphasis on its proper observation by the laity.  Part of the rationale for this was biblical and theological in nature,[3] but it also related to the development of ideas about authority, order and decency within the institutional Church of England.  Sabbatarianism was therefore no more a uniquely Puritan doctrine that it was a specifically Protestant one, although there was undeniably a tendency to give greater weight and more strict interpretation upon this (as with much else) by the hotter sort of Protestant.  As Christopher Haigh has shown us, of all the counties in England Lancashire proved to be one of the most stubborn in its adherence to the Catholic faith, and one of the most resistant to the changes to religion which various Tudor regimes from Henry VIII to Elizabeth I sought to introduce.[4]  But what in practice made Sabbath-breaking a crime, and why did some individuals choose to break the Sabbath in the most conspicuous way available to them; by drawing attention to themselves and their actions through musical performance?  It strikes me from a range of evidence (again, drawn from the REED volumes) that the term Sabbath-breaking covers a broader range of actions and motives than is often acknowledged, for conflicts over Sabbath observance could involve clashes both of religious belief – broadly speaking, between ‘Catholics’ and ‘Protestants’ – and of religious culture, setting the self-described godly against adherents of a traditional festive culture who in other respects remained more or less in conformity with the Church of England.  And beyond the straightforwardly religious, tensions surrounding Sabbath-breaking could also be generated by enforcement of and resistance to an increasingly demanding culture of ecclesiastical authority, as well as acting as a cipher for frictions generated by quite different social, economic or indeed personal circumstances.[5]

In 1588 the Churchwardens of Ashton under Lyne were required to present to the Quarter Sessions ‘all those that haue kepte wakes fayres markettes bearbaites bullbaites, Greenes Ales may gammes, piping & dauncinge, hunting & gaminge vpon the Saobothe’: their curt response, ‘I knowe none’.[6]  The effect of grouping so many prohibited practices together in this way is to suggest a kind of equivalency between them.  In essence, it is a list of fun things which might draw people away from the church during divine service.

Such Sabbath-breaking consisted of a general low-level potential for disorder and disrespect, as epitomised by a reported incident fifteen miles north east of Ashton, at Bury, the same year.  Almost two-dozen named individuals from Leeze [Lees], Oldham, Chattertone [Chadderton] and Hollinwood[e] were identified as forming part of a larger group (‘to the number of threescore as I herd’) attending an illicit ale.  On Sunday 19 July, ‘in tyme of divine service’ there was ‘gallowpinge of horses in the Streete of Burye, shawtinge & pypinge with other fowle disorderes in the forenone of the same daie.’  Their actions, the report noted, were ‘a Lamentable spectacle in the place of a preaching ministery’, and the authors begged that those involved be ‘reformed in suche good sorte as the offendores & others by ther example maye be affraide to Commyte the Lyke againe’.[7]  The frustration – even anger – of the report-writers is clear, but the event they describe comes across as a popular celebration with a broad base of community support.

The motives of three Sabbath-breakers in 1601 at Aughton, thirty miles or so to the west, are less clear.  Proceedings for Warrington deanery record that ‘a lewde pyper abvsed hym selfe the vth of Iulie by plaing att service tyme in Aughton churche & aboute the church & would not bee staied by the Churchwardens’.[8]  At the same time the two other defendants, Richerd Arnold and Gadfred Cropper joined in and ‘vsed the like misorder’.  Details are sketchy, but clearly playing music in and around the church itself with two companions during divine service was an entirely different kettle of fish from skipping church to attend a large and noisy ale some distance away.  In simple terms of maintaining order, a crowd of almost sixty was of much greater concern than the antics of three foolhardy friends.  But while the attitude of the former seems simply to have represented a causal disregard for the service on that day, the latter comes across as a much more serious, calculated, targeted and religious act of disruption.

That some species of Sabbath-breaking could be worse than others was recognised a decade later in a series of sermons delivered in Lancashire and subsequently published by William Harrison, who described himself as ‘his Maiesties preacher there’.[9]  Harrison conceded that the fruitfulness of preaching the gospel in the north west ‘hath bene, and still is greatly hindered by two sortes of persons, namely by popish priests, and profane pypers’.  He lamented that for every person listening to divine service in church, ‘euery pyper (there being many in one parish) should at the same instant, haue many hundreds on the greenes’.  Crucially, this was because the common people judged it ‘an honest and lawfull’ keeping of the Sabbath to spend the afternoons in musical recreation.  Such popular misconceptions were fuelled by a darker cause: according to Harrison, the purses of papists and recusants were ‘euer open for the hyring of the pyper’, in order to keep people from the church and continue them in popery and ignorance.

Let me finish by briefly describing two other cases.  In Newchurch in Pendle, 1596, Nicholas Hargreaves was cautioned for drawing people to his house from evening prayer on the Sabbath by playing upon an organ, and threatened with excommunication by the judge if he did the same again.[10]  Meanwhile, in Chester in 1597, the parish clerk of Winwick[11] (William Taylor) was brought before the metropolitan consistory sessions for neglecting his duties in the church ‘divers & sundry sundayes and holly dayes’.  Matters, it seem, came to a head ‘in or aboutes the xixth of December last’, when Taylor entered the church ‘aboutes the reading of the seconde Lesson with one Spode a piper pipinge or goinge before thee very Contemptuously & disorderlye into the said Church flyringe & laughing so that therby the Congragacion there heringe devine service were greatly trobled & annoyed’.[12]  Whatever their reasons for acting as they did, the protest of Taylor the clerk could not have been more public or disruptive,[13] while Hargreaves only chose to disrupt divine service insofar as he absented himself (and several of his friends) from it.  And yet his decision to play the organ at home made what could have been a private act of defiance into a de facto semi-public one.  It may even represent a particular form of Sabbath observation which was not tolerated within the church itself.  Clearly this handful of examples do not by themselves provide all the answers, but I certainly think they raise some interesting questions.  Sabbath-breaking could be a very public affair, a private act, or sit somewhere between the two.  Divine service could be actively disrupted, quietly subverted, or even just ignored.  If ‘monster readers have any further thoughts then I’d be very interested to hear them…

[2] Kenneth Parker, The English Sabbath: A study of doctrine and discipline from the Reformation to the Civil War (CUP, 1988), p. 1.

[3] I.e. the increasing prominence of the fourth commandment: ‘Remember the Sabbath day, to keep it holy’.

[9] William Harrison, The difference of hearers. Or An exposition of the parable of the sower Deliuered in certaine sermons at Hyton in Lancashire (1614), STC2: 12870.

[11] C.f. Haigh’s description of a conservative musical protest at the singing of vernacular metrical psalms in Winwick earlier in Elizabeth’s reign, Reformation and Resistance in Tudor Lancashire, p. 219.

[13] I’m put in mind slightly of the Catholic debates over the strategy of church attendance and public protestation described by Peter Lake and Michael Questier in The Trials of Margaret Clitherow (2011).

4 thoughts on “REED all about it III: Some musings on music and the micropolitics of Sabbath-breaking in Jacobethan Lancashire”