END_OF_DOCUMENT_TOKEN_TO_BE_REPLACED

The ‘monster now has a number of long running ‘mini-series’ – collections of posts that are grouped around a particular theme, topic, or source collection. For your delectation we now bring you a list of the said mini-series, with a brief description of the contents of each. For future reference the link is just up there, on the right end of the menu bar. Happy browsing!

In November I had the pleasure of visiting a wonderful new exhibition at Exeter’s recently refurbished Royal Albert Memorial Museum. Titled ‘West Country to World’s End: the South West in the Tudor Age’, the publicity describes it as ‘celebrating the spirit of adventure and enterprise of south west people’ during the Elizabethan ‘Golden Age’.

In this mini-series of blogs I take monster readers through a virtual tour of some of the exhibition’s objects and images, exploring what they tell us about the history of the early modern South West.

‘West Country to World’s End: the South West in the Tudor Age’ runs until 2 March 2014 at Exeter’s RoyalAlbertMemorialMuseum. You can find all the details about the museum, it’s opening times, it’s wonderful café and more on their website.

This is a final post in a short series relating to Exeter’s martyrs memorial, the others are on the following:

In this final post I conclude with some thoughts on the ways that objects and places are invested with meaning, and the relationship between space, memory and history.

My final question about Exeter’s martyr memorial was: what is ‘Livery Dole’? The plaque on the monument stated that Thomas Benet had suffered at ‘Livery Dole’ but although I knew what an aircraft livery was, or could countenance a livery stable, but otherwise I was drawing a blank. Exeter Memories came to my rescue again: Livery Dole is an ancient triangular site between what is now Heavitree Road and Magdalen Road. It was used as a place for executions – the last took place in 1818, when the unfortunate Samuel Holmyard was hanged for passing a forged City Bank one pound note.

W. Spreat lithograph from 1850 showing the Dennis almshouses before they were replaced.

Liverydole now made sense – it meant that the Exeter memorial had therefore been erected near to the spot where Thomas Benet had been burnt to death. Hence my final post is about the meanings and significance that are attached to particular places and features of the landscape. All of the Protestant monuments that I have uncovered are erected as close as possible to the original site of the martyrdom, they are a deliberate attempt to attach particular memories to those sites, for later generations to read. Nearby, Heavitree’s almshouses represent a similar attempt to shape historical memory – they were erected in 1591 by Sir Robert Dennis, by tradition in penance for the part his ancestor had played in the execution of Thomas Benet in 1531. The ancestor in question was Sir Thomas Dennis, who had been the Sheriff of Exeter at the time and who had sentenced Benet to death. This act of charity proved that the current Sir Dennis was now firmly on the side of the true Church, unlike his unenlightened Catholic ancestor. END_OF_DOCUMENT_TOKEN_TO_BE_REPLACED

This is the fourth post in a series of posts relating to Exeter’s martyrs memorial, the others are on the following: 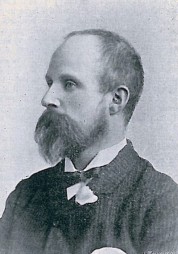 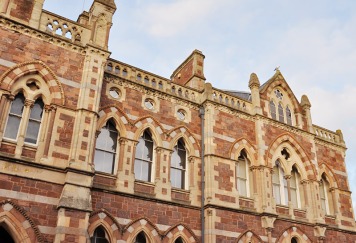 Today’s question is – what do we know about the creation and placing of Exeter’s martyr monument? The endlessly informative Exeter memories website furnished me with more details about the city’s own specimen. Funded by public conscription, it was designed by Exeter’s Harry Hems (above), a London born master sculptor and wood carver, who made Exeter his home. END_OF_DOCUMENT_TOKEN_TO_BE_REPLACED

This is the third in a series of posts relating to Exeter’s martyr memorial. The first post, contains the details of the martyrs themselves, the second, is on John Foxe’s Actes and Monuments.

What I really wanted to know about Exeter’s martyr monument, was who paid for and created it – when was it erected, how and why? A third plaque on the memorial yielded some information:

To the glory of God & in honour of his faithful witnesses who near this spot yielded their bodies to be burned for love to Christ and in vindication of the principles of the Protestant Reformation this monument was erected by public subscription AD 1909. They being dead yet speak.

Thus the obelisk dates from the twentieth-century, which makes sense – the English Reformation was profoundly iconoclastic and it is hard to imagine money being spent on erecting monuments in an age when destruction of imagery was a mark of Protestant identity. In fact the image of Agnes Prest from the 1887 edition of Foxe that I mentioned

in my previous post supports just this point. It depicts a visit that Prest paid to Exeter Cathedral, where she met a ‘cunning’ Dutch craftsmen who was apparently repairing the  images and sculptures that had been disfigured during the previous, iconoclastic reign of Edward VI. Prest supposedly said to the Dutchman ‘what a mad man art thou… to make them new noses, which within a few dayes shall all lose their heades’. In response to this rather prophetic prediction of further reform, the stonemason replied with a well thought out theological argument: ‘Thou art a whore!’. Quick as a flash, Prest replied ‘Nay, thy Images are whores, and thou art a whore hunter: for doth not God say you goe a whoring after straunge Gods, figures of your owne making?’ END_OF_DOCUMENT_TOKEN_TO_BE_REPLACED

This is the second of a series of posts on issues relating to Exeter’s martyr memorial. The first post discusses the details of the martyrs themselves.

The information about Exeter’s martyrs that I related in yesterday’s post was taken from John Foxe’s Actes and Monuments, popularly known as the ‘Book of Martyrs’. Actes was first published in 1563, five years into the reign of Elizabeth I. It is a work of Protestant history and martyrology, mainly consisting of a polemical account of the sufferings of evangelicals under the Catholic Church.

I’ve previously discussed images of martyrdom on the monster, in this post I am more concerned with as a history of the ‘true’ Church. END_OF_DOCUMENT_TOKEN_TO_BE_REPLACED

A recent trip to the pub took me into a new part of Exeter, and on my way there I stumbled across a fascinating snapshot of its history. At the corner of Barnfield and Denmark roads I came to a memorial in the form of an obelisk of Dartmoor granite, with four bronze panels around its base. I assumed it was a twentieth-century war memorial, and went to have a closer look at the bronze reliefs – hey, I’m a historian, my profession compels me to! On examination, I was surprised to discover not a weary line

of soldiers in metal helmets, but instead what appeared to be a monk fixing a notice to a wooden door, and I didn’t need the inscription to tell me the door belonged to Exeter Cathedral – an angel from the first tier of sculptures on the West front is clearly depicted on the right hand side. What’s more, a second bronze showed a women chained to a post, clearly suffering a fiery death at the hands of the authorities. Reading the inscriptions, I realised that I had chanced upon a memorial to two sixteenth-century Protestant martyrs who had met their deaths in Exeter.

Firing up the computer on my return home, I soon disappeared down the rabbit hole of the city’s history and our memories, stories about and uses of our past. My initial idea for a brief post mutated into a series of linked musings on the tangled threads of the regional and national history, in all its venerable and unsavoury glory. I’ll be publishing one each day this week. Today I start with the story of the two martyrs commemorated on the memorial, Thomas Benet and Agnes Prest. END_OF_DOCUMENT_TOKEN_TO_BE_REPLACED