With the school holidays imminent it seemed like a good time to offer another instalment of our summer series of beach books for the historically inclined. I would understand, albeit with a tinge of sadness, if you thought the social, economic or religious histories of early modern England were a bit sober for those long hot afternoons by the pool. But perhaps if I put on my other hat for this list – as a historian of drinking culture – I might be able to offer some suggestions more fitting to be consumed alongside a few cheeky cocktails. So here are my top 5 suggestions for a crash course on the history of drinking… 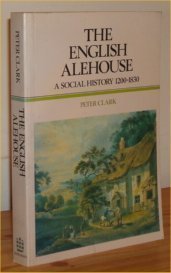 Best consumed with pint and crisps in a sunny beer garden

Start with this, one of the founding texts of the drinking studies field. It is vividly detailed, chronologically broad, and written to appeal to specialist and non-specialist alike. And who can really claim to have any grasp of English history without knowing the history of its most prized institution, the pub? Its more focused on the socio-economic history of the alehouse than on drinking culture per se, but despite being written before the ‘cultural turn’ that has ignited the drinking studies field it remains a go-to text for historians, sociologists and literary scholars alike. And Clark deserves credit for pioneering the serious study of drinking at a time when such a project would have been widely sniffed at by many of his fellow historians.

2) B. Ann Tlusty, Bacchus and Civic Order: The Culture of Drink in Early Modern Germany (2001)

You scratch my Bacchus…

This is one of the two books (the other being Tom Brennan’s Public Drinking and Popular Culture in Eighteenth-Century Paris, just edged out of this list) responsible for fermenting (ahem) the current vogue for examining past drinking cultures. In this case study of the German city of Augsburg, Tlusty rejects the long-standing ‘drink-as-despair’ model for interpreting drink history—that people in the past drank in proportion to how miserable their lives were—and instead offers one of the first attempts to examine the reasons why people drank in the past from their own perspective. Combining the examination of colourful legal records and the German ‘Trinkliteratur’ print genre, her findings suggest drinking was often seen by early moderns as a positive and important cultural activity. Fascinating, original and highly readable, it has provided a template for much of what has followed.

3) James Nicholls, The Politics of Alcohol: A History of the Drink Question in England (2009)

A history of the ‘drink question’

Ostensibly a survey of public debates on alcohol from the Reformation to the present, this book is really much more than that. It provides a great starting point for the non-specialist, offering an overview of the controversial place of alcohol in English society, culture and politics over the past 500 years. It’s another very readable work, contains useful sketches of all the key historical moments, and plenty of handy quotes and facts for fleshing out a lecture. I regularly find myself reaching for it: it’s a must have reference guide to the history of drinking in England, and a good choice for anyone looking for a historical perspective on today’s debates.

4) David Hancock, Oceans of Wine: Madeira and the Emergence of American Trade and Taste (2009)

Oceans of wine? Anyone fancy a swim…

I’ll be honest, I haven’t actually read this from cover to cover yet, but every time I dip into it I get excited. And I would certainly be taking it with me to a subtropical island, not least because it is about one. It takes as its starting point Madeira, the Portuguese archipelago situated in the North Atlantic, and tells the story—lucidly from the bits I’ve sampled—of the wine produced and traded from there, focusing in particular on its consumption in North America. It uses a favourite technique of mine, zooming in on one commodity, individual or institution to illuminate a much larger historical process: here using Madeira to explore the development of global commerce in the early modern period. Its scope is remarkable, ranging across chemistry, anthropology, material culture, and the relationship between individuals and market forces: it has all the makings of a tour de force to get lost in for a week.

5) Phil Withington and Angela McShane (eds) Cultures of Intoxication: A Past and Present Supplement (2014)

The intellectual equivalent of a global pub crawl

Not technically a monograph, but no crash course reading list would be complete without pointing you in the direction of the most cutting-edge work in the field, and this collection is just that. Securing a special edition of the venerable journal Past and Present represents a major landmark for the field of drinking studies, a mark of recognition that the subject is now taken very seriously indeed. And who better to carry the banner than Withington and McShane, two of its greatest champions. The former’s introduction provides a persuasive rationale of why the field is so important, and a useful overview of all the developments it has seen and is seeing. The other chapters lead the reader on an exhilarating journey from the ancient Greek symposium, through the ambivalence surrounding alcohol in the Islamic Middle East, to the drinking rituals of Amerindians and the drinking vessels used by seventeenth-century English Royalists toasting the King’s good health. It’s the intellectual equivalent of an epic pub crawl. But it leaves no hangover, and for a limited time only is still available to both peruse and download for free, from here. Get there quick though, as free access ends at the end of July.

So there you go, my suggestions for some summer reading on the history of drinking: as ever, I’d love to hear your own alternatives in the comments section…

11 thoughts on “Marooned On An Island Monographs: A History of Drinking Reading List”