A recent mini-series has emerged on the monster, in which Mark (social history and the history of drinking), Jonathan (reformation history) and Brodie (economic history) have all shared the classic history books that they would take with them if marooned on a Pacific beach. But given that it is impossible to imagine anyone actually settling down with a cocktail and Joan Thirsk’s Economic Policy and Projects, and following an excellent suggestion by a monster reader, my list is comprised of some historical fiction that you might actually pop in your suitcase this summer.

But first, I have to get something off my chest. My name is Laura, I am an early modern historian, and I didn’t like Wolf Hall. In fact, I couldn’t even finish it. I tried, several times, and eventually made it about 200 pages in, but my resolve faltered when I realised I still had 450 pages to battle my way through. Even now I am not quite sure of the reason behind my complete failure to engage with it, but I suspect the slow pace didn’t help, nor the subject matter – when you have just marked 50 essays on Tudor England, spending your precious free time inside Thomas Cromwell’s head seems more like hard work than fun. So apologies, but Wolf Hall doesn’t make my list, though I appreciate that it is much loved – indeed, that is why I wanted to explain its absence. I hope you can still bring yourself to read what follows.

The other thing to note is that I have defined historical fiction in an entirely arbitrary way in order to narrow the field and make my task slightly easier – I have only included novels written by authors writing about a past they did not experience during their lifetime, hence no room for my beloved Daniel Defoe, Henry Fielding or Tim O’Brien – they will have to wait for another list!

Pears’ murder mystery is a meticulously researched and brilliantly crafted novel covering spies, blood transfusions, secret societies, witchcraft, faith, political intrigue and much more. It vividly conjures up England in the 1660s, a few years after the Restoration of the monarchy and Church, in a world deeply marked by the political, religious and intellectual revolutions of the preceding decades. The action revolves around the murder of an Oxford fellow, with four witnesses describing in turn their recollections of the event some years later. These unreliable narrators give the novel its ultra-modern feel, the multiple perspectives encouraging the reader to be aware of subtle tricks of misdirection and omission in the witnesses’ evidence and in the process revealing the complexity of influences and motives of the inhabitants of early modern society. In other words, this masterpiece encourages the kind of critical reading of the evidence that historians are trained in – it’s no surprise that so many academics rate it highly! The subject matter is also not to be missed – the four witnesses include mathematician John Wallis and antiquarian Anthony Wood, and there are walk on parts for many other notable figures, including Robert Boyle, Samuel Pepys and Valentine Greatorex.

2) Charles Dickens, Barnaby Rudge: A Tale of the Riots of Eighty (Serialised Feb-Nov 1841).

Barnaby Rudge was Dickens’ first attempt at a historical novel, and it is less highly esteemed and much less well known than his only other attempt, A Tale of Two Cities (1859). Written during a time of unrest in Victorian England, Rudge also deals with rebellious times, treating the Gordon Riots of 1780, when Protestant anti-Catholic mobs in London erupted into lethal violence, attacking Parliament and the Bank of England, and largely destroying Newgate Prison and the Clink. (Linda Colley describes the events as ‘the largest, deadliest and most protracted urban riots in British history’). Having grown up in Dickens’ country in North West Kent it was inevitable that I would be enthralled by his work, but the strange Rudge is one of my favourites. It has the usual hallmarks of better known Dickensian classics: persistent humour, careful plotting, keenly observed characters suffering an unusually high level of nominative determinism. The book is named for a mentally disabled young man who wanders in and out of the action with his creepy talking raven, Grip; and whilst the heroes and villains are a pleasing mix of both Catholic and Protestant characters, indicating Dickens’ liberalism, his descriptions of the ordinary, mostly working-class mob, are vicious and uncompromising, reflecting his own horror of the many-headed monster. It is the descriptions of the relentless momentum of the rioters, incited by opportunists from the upper classes and swept along in a mindless orgy of violence that really give the novel its power, and despite its flaws it is a neglected gem.

3) Arthur Conan Doyle, Micah Clarke: his statement as made to his three grandchildren Gervas and Reuben during the hard winter of 1734 (1889)

A rollicking historical coming of age adventure novel narrating the events of the Monmouth Rebellion of 1685. Micah Clarke is a young teenager living near Portsmouth, the son of ‘Ironside Joe’, a devout Protestant who had fought on the side of Parliament in the Civil War. With his father’s encouragement, Micah joins the rebellion against the Catholic James II led by the 1st Duke of Monmouth, first marching to Taunton and eventually fighting at the Battle of Sedgemoor. Along the way Clarke gets into various (and sometimes very harrowing) scrapes and learns the ways of the world, encountering numerous colourful characters including Monmouth himself, but also the fictionalised London gent and wit Sir Gervas Jerome (forced to join the rebels due to his financial difficulties) and the ruthless professional soldier Decimus Saxon (cunningly feigning piety to get his own way). A light read notable for the impressively realised seventeenth-century world it reveals – full of incidental and everyday details that betray an impressive historical knowledge. Identifying those anachronistic elements/ attitudes that were clearly the product of Doyle’s Catholic upbringing is all part of the fun.

Robert Harris does a great job of writing a suspenseful novel despite the fact that all his readers will already know the ending. The appeal for me is the way that Harris uses a narrative of the eruption of Mount Vesuvius to give a detailed picture of life in the Roman Empire in 79AD. The reader follows an aquarius (hydraulic engineer) as he tries to discover why the water supply to many towns in the surrounding area has dried up, in the process becoming embroiled in the murky politics of the region and meeting Pliny the Elder. But all of this is quite literally overshadowed by the catastrophic eruption of the volcano which is described to devastating effect. If the present-day dialogue seems a little incongruous at times and the romance rather unnecessary, it’s spectacular conclusion easily blows these objections away. Note: the novel has nothing to do with the recent hollywood blockbuster on the same topic. 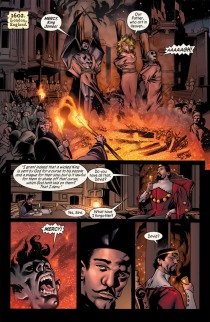 It’s 1602, Elizabeth I is finally coming to the end of her lengthy reign, there is trouble abroad and economic strife at home, strange portents have been seen in the skies over London… and most of the original Marvel superheroes and villains have suddenly turned up on the scene! Forgive what might be considered a frivolous choice and bear with me while I explain my final entry. Marvel 1602 is a series of comics that transplants Marvel characters into the Jacobethan era, weaving their marvellous origins into the events and institutions of the age. And why not? Mixing the providential and apocalyptic tropes of the Elizabethan world with the concerns of contemporary comics actually works rather well. The early modern age was far more attuned to the possibilities of the invisible world than the current one after all, and winged beings with preternatural powers and James I’s anxieties over the ‘witchbreed’ and entanglement with the Inquisition hardly seem to stretch the bounds of possibility too far. Best of all, transporting marvel heroes back to 1602 reveals some very surprising and satisfying roots for Captain America…

On reflection, perhaps my list also helps to explain my lack of enthusiasm for Wolf Hall. Whilst all my choices deal with significant historical events, they focus their narratives on bit players who only encounter great historical personalities on occasion. This frees up the authors to weave unpredictable plots and to play with their subject matter, providing the everyday look and feel of a period without burying the reader in details they could find in a conventional history book. This leads me to conclude that I probably derive my historical novel satisfaction from fleshing out my contextual understanding of great events and people, without getting too enmeshed in the particulars and straying too close to ‘the day job’. I enjoy the creative liberties that these authors take with their subjects, which opens up spaces to think differently or more loosely about the past. And of course many of these novels also prompt reflection and comparison with events of more recent history, acting as fingerposts to unexpected and unexplored avenues. I’d be delighted to know which novels do the same for you…

Postcript, 05/08/14: More on the role of historical fiction in this Guardian article, including some thoughts from Hilary Mantel herself on the genre. Which I entirely agree with.

Further postscript, 05/09/14: The discussion continues with the BBC dedicating ‘A Point of View‘ to the question.

57 thoughts on “Marooned on an Island Monographs: A Historical Fiction Reading List”