This is the second of three posts surveying the London Catholic community around the time of the Gunpowder Plot. View the first here.

Recusant roll entries can give details about social status.

Having established that there were lots of missionary priests about in Jacobethan London, my question today is: how much of an appetite was there for what Catholics were selling? We are fortunate in that recusant rolls survive for Middlesex from 1603-1625, so these provide part of an answer. Recusancy was the term applied to those who refused to attend Church of England services: from 1593 these people were punished with fines, property confiscations and imprisonment. Whilst not all people who were fined for refusing to take communion in Church were Catholics (they might be Protestant nonconformists), Jacobethan Puritans were less likely to avoid attending altogether, and more likely to attend begrudgingly, omitting parts of the service or disrupting the performance as part of a vocal protest. Records were kept of those people that were indicted, and these recusant rolls often give details about the identity and status of absentees, in the process historians have assumed that they furnish us with information about the Catholic community.

The editor of the Middlesex records admits the figures for the first five years of the reign are ‘defective’, but they nevertheless reveal some interesting trends. At the outset of his reign James appears to have shown greater tolerance towards his Catholic subjects, and the remittance of recusant fines between July and November 1604 probably accounts for the low numbers of indictments seen in the graph. A Treaty with Spain, signed in the same year, would also have encouraged such trends.

Following the Gunpowder Plot, and the introduction of an explicit oath of allegiance in 1606, it appears that indictments doubled, peaking in 1608. It is unsurprising to find evidence of the harsher application of penal laws in the city following the events of 5 November 1605, and yet, historians generally agree that James was inclined to view the plot as the work of a fanatical minority and that no intense persecution followed in its wake. The oath was not vigorously enforced until at least 1610, when a restive parliament and the assassination of Henry IV France resulted in the stricter enforcement of the penal laws. This makes the indictment figures more problematic – the low numbers in 1610 could be taken to contradict the generally accepted view of government policy, but equally they may represent greater compliance on the behalf of harried citizens faced with more vigilant persecution and stricter financial penalties. Other aspects of the figure are perhaps easier to read, the spike around 1615 followed grumblings in parliament that the penal laws were not being strictly enforced, provoking a crackdown on Catholics in close proximity, and the general decline in numbers towards the end of the reign reflects closer relations with Spain and the opening of negotiations to secure a Spanish match for Prince Charles. 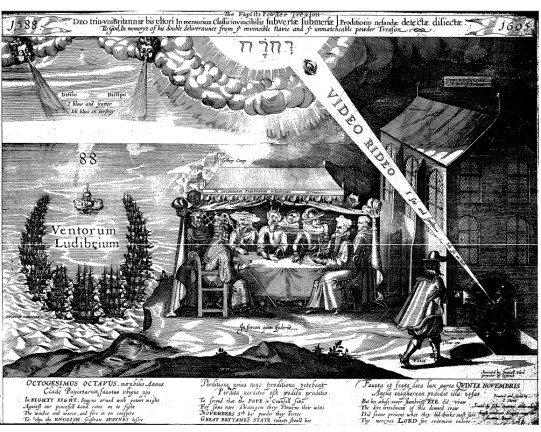 Samuel Ward engraving celebrating the ‘double deliverance’ from the Armada and Gunpowder Plot, 1605.

It is clear that a recusancy statistics cannot be simply treated as a poll or index of the Catholics living in London in a given year. The raw figures are ambiguous at best and perhaps tells us more about government policy and anxieties than personal convictions and allegiance. Yet they are still revealing of broader patterns. The rolls reveal a constantly shifting and variable community, for names which recur throughout the reign do not necessarily appear in every roll. Of those individuals that are referred to more than ten times throughout the twenty-two years of the reign, the average number of years when recusancy is recorded is eight, although this figure obscures a great variation in practice. For example, John Blake, a glazier, and his wife Magdelena are referred to in the recusant rolls over ten times, but their recusancy only occurs in three separate years. This is in contrast to the chandler Daniel Knowlinge and his wife Elizabeth, whose recusancy spans the entire reign – first appearing in the rolls in 1603 they are listed again in 1624, and they were prosecuted in thirteen of the intervening years.

The mode value of the thirty-four individuals that are referred to more than ten times in the rolls is six or seven years of recusancy, consequently I have used the thirteen individuals that conform to this value as a sample for further analysis. Several interesting details are suggested by this evidence – it is apparent that strict recusancy (as advocated by the Pope) was not practiced within London, rather individuals moved in and out of conformity with the Church of England, particularly at the beginning of the reign when a scattering of references to individuals reveal no discernable pattern. These findings are consistent with the work that Alexandra Walsham has undertaken on Church papists. Walsham has confidently argued that occasional conformity could be privately countenanced as a temporary expedient by the leaders of the Counter-Reformation. Whilst acknowledging that the extent of compromise permissible with the state was much debated among contemporaries, strict recusancy required ‘either indomitable courage or fanaticism’, and faced with financial and familial ruin conformity as an ‘involuntary act of a constrained will’ was possible. In light of Walsham’s argument that the categories of recusant and church papist are not mutually exclusive, the sample demonstrates that extenuating, personal circumstances clearly affected recusancy rates.

However, despite obvious fluctuation, the figures also reveal continuity in personnel. The greater enforcement of the penal laws around 1614-17, the reinstatement of legislation following the collapse of Spanish marriage negotiations in 1623, and the corresponding increase in indictment numbers may therefore not represent the detection of new recusants, but rather the stricter pursuit of known non-conformists. Political circumstances thus played a major part in defining the form Catholicism took within the capital. The reality was that politics and religion commingled in ecclesiastical flux.

Scrutiny of the recusant rolls themselves can therefore reveal much about the composition and nature of the Catholic community in London, but conversely also reveals their inherent limitations as a source. Reliance on official records tends to create a picture of a faith defined solely in relation to action taken by the government in opposition to it, and encourages a simplistic definition of Catholicism, when the reality is far more complicated. Historians have rightly argued that that formal, ritualistic separation from the Church should not be taken as the key criterion for defining the Catholic community, and the fluctuating conformity exhibited by those individuals appearing in the rolls supports this argument. Evidently, to understand what it meant to these goldsmiths, tailors, gentlemen, servants and scissor-makers to be Catholic during James’ reign, it is necessary to supplement recusant roll evidence by attempting to map the presence that this proscribed faith had within the city – which I’ll be doing in my final post tomorrow.

2 thoughts on “Gunpowder, Treason and Plot II: The People”