The marriage of Protestant clergymen was one of the most controversial aspects of the reformation, in England as elsewhere. Opprobrium was heaped upon clergy who married, and also upon their wives. Even death was no escape from censure. During the reign of Mary I, Strype tells us, Richard Marshall, the dean of Christ Church, exhumed the body of Peter Martyr Vermigli’s wife from its resting place in the cathedral, and had it thrown onto a dunghill, presumably because in the eyes of the Catholic authorities she was no better than a heretical priest’s whore.[1]

Historical interest in clerical marriage and clergy wives has increased substantially in recent years, with our understanding of the field primarily shaped by the work of Eric Carlson and Helen Parish.[2] This also seems to be a topic that really captures the imagination of students: when I ask my seminar groups to look at the Marian Injunctions of 1554, for example, they often marvel at the amount of attention given to clerical marriage, together with the uncompromising and uncharitable tone of the articles (the ones that say that married priests must no longer be allowed to be working priests, or to remain ‘married’). I’ve recently finished supervising an undergraduate dissertation on clerical marriage, and whilst the student, Helena Theo, worked extremely hard, and turned up some interesting material, it is clear that there is not exactly a wealth of sources giving an intimate picture of the relationships of the first generation of married clergy and their wives, especially from the female point of view (thank you Helena, for a very enjoyable supervisory experience, and for your permission to mention you here!).

In this post, I want to try to explore this relationship in a little more detail, and especially the extent to which marriage was an important aspect of the identity these early reformers constructed for themselves. I’m going to do so using a very well-known source, but one which (to my knowledge) has not been extensively mined for this sort of material, either by any historian of clerical marriage, or indeed by Helena, whose project went off in a slightly different direction. That source is the two-volumes of The Zurich Letters, published by the Parker Society in the 1840s, and, as it says on the title page, ‘comprising the correspondence of several English bishops and others with some of the Helvetian reformers during the reign of Queen Elizabeth’.

On May 21, 1559, for example, John Parkhurst, who in ten months would be nominated to the see of Norwich, wrote to Heinrich Bullinger, ‘overwhelm, so to speak, with salutations in my name your good wife, sons and daughters, and most honourable sons-in-law’. Later, he explained, ‘my wife salutes you, your wife, sons and daughters, and all friends. She very frequently falls into tears when any mention is made of the ladies of Zurich’.[3] That phrase, ‘the ladies of Zurich’, seems telling: it is not difficult to imagine that the wives of the native Swiss and exiled English clergy had formed a close network of friendship and support during the reign of Mary, and that to be wrenched away from such an environment was emotionally difficult, even when it was a consequence of returning back to England.

The reformers were assiduous in passing along the best wishes of their wives in their correspondence, even when they had not met. In a letter to Peter Martyr of 2 November 1560, the future bishop of Salisbury, John Jewel, wrote; ‘farewell, my father, and salute your wife in my name, a lady indeed personally unknown to me, but with whom I am nevertheless now well acquainted, both by your letter, and our friend Abel’s commendation of her’.[4] Marriage and wives were clearly important topics of conversation not only between, but also about, members of this tight-knit reforming circle. The same was true not only of wives, but also children. In a letter to Martyr dated only three days after the last, Jewel wrote; ‘salute in my name that excellent lady your wife: may God grant her a happy delivery, and make you the father of a beautiful offspring!’[5] Just under a fortnight later, Jewel wrote, ‘salute the excellent lady your wife, and give a kiss for me to your little son Isaac, whom I can fancy that I hear bawling even here’.[6] A week later, John Parkhurst wrote to Josiah Simler, ‘salute in my name your excellent wife and recent bride, your Anna’. It seems reasonable to assume that, in the face of general public hostility, these kinds of sentiments formed a vital support network, to praise and extol the virtue of clerical marriage.

Clerical marriage and clerical wives therefore seem to have functioned as a kind of shibboleth amongst these returning exiles: acceptance of either (or both) was a sure-fire signal of acceptance of the gospel in every respect. The evangelical Thomas Lever wrote to Bullinger in July 1560 that, upon moving to Coventry, ‘after I had discovered, by the experience of some weeks, that vast numbers in this place were in the habit of frequenting the public preaching of the gospel, I consented to their request, that I should settle my wife and family among them: and thus, now for nearly a whole year, I have preached to them without any hindrance, and they have liberally maintained me and my family in this city’.[7] The willingness of the people of Coventry to welcome Lever and (in particular) his wife and family, was a mark of their godliness, and vice versa. 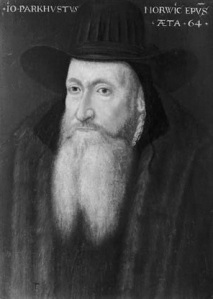 Clergy wives did not merely tag along with, but also appear to have helped to enhance, their husbands’ relationships with other reformers. At the end of a letter to Bullinger written in August 1563, Parkhurst remarked upon a recent truce with France, and also informed the Swiss reformer that ‘my wife sends you two pairs of boots, which you may wear when rude Boreas rushes down, bringing cold, frost, and snow’.[8] Parkhurst’s wife appears to have had an independent correspondence with Bullinger, as the bishop also noted, ‘my wife salutes you all, and thanks you for your letter. As no one who understands German is at hand she is unable to reply to you, which she very much regrets’.[9] Two years later, news of the illness of Bullinger and his family reached the Parkhursts. John wrote, ‘when I read to my wife your letter in German, as soon as she heard of the death of your wife and daughter, she burst into a flood of tears. I was therefore obliged to discontinue reading, as she was unable to listen’. These relationships were not symbolic, but real, and the news of the death of Bullinger’s wife was an occasion of real and uncontrollable grief to Parkhurst’s.

Marriage was an important aspect of identity for the new Protestant clergy, to the extent that they even occasionally tried matchmaking for one another. In a letter to Simler dated June 1574, Parkhurst wrote, ‘I wish you would look out for a wife for Rodolph [Gualter, the Younger]. If you are inclined to take my advice, Dorothea, Bullinger’s daughter, shall be the person: for she is pious, and, like our friend, the offspring of pious parents: so that you will do well if they should, by your means, be joined together in holy matrimony’.[10] When Gualter did eventually marry, John Rainolds, the president of Corpus Christi, wrote to him, ‘I both hope and wish that she may prove such a wife to you as Gregory of Nazianzum the son tells that that his mother was to Nazianzene his father; not only a helpmate, but as it were a guide, a mistress in godliness, both by her words and actions urging him on to the best pursuits’.[11] The loss of a wife was therefore a hard thing to bear: in a letter to Gualter dated August 1576, Bishop Horne of Winchester referred to the death of his wife as the loss of ‘my other half’.[12]

To conclude, the repeated refrain of these letters, to ‘salute your wife in my name, and that of my wife’, should probably be viewed as more than common courtesy, period-specific formula, or epistolary boilerplate.[13] The testimony of the Zurich letters supports Nancy Bjorklund’s findings concerning the wife of Archbishop Matthew Parker, that ‘a godly wife is an helper’.[14] But more than that, she was also an essential part of her husband’s identity as a reformed cleric, both passively, but also actively, through her actions in forming and maintaining important relationships within the broader community of reforming ministers. Parker spent the reign of Mary as a Nicodemite, but perhaps especially for the returning Marian exiles, the salutations, remembrances, gifts and correspondence of wives was vital for maintaining and progressing the Protestant cause.