Links to the other posts in the ‘On periodisation’ series:

As Laura outlined in the previous post of this ‘monster series on periodisation, the term ‘early modern’ has – since the 1970s, at least in the history departments of UK universities  – come to be seen as one of the ‘holy trinity’ of historical periods: the medieval, the early modern, the modern. But why?

There a number of reasons why its widespread acceptance and use could be considered somewhat surprising. Its current prevalence in publication and job titles – and on this blog, which self-identifies as an ‘early modern history’ blog – is remarkable given that it is a relative newcomer to the periodisation party. And as Laura has already highlighted, there is little agreement on when exactly it was (1500-1700 is, of course, the right answer…)[1]

But to me the main reason why its rise to near canonical status seems a little odd is because of what it implies: that the sixteenth and seventeenth centuries are best understood as being on their way to somewhere else, or as a sub-period of modernity, rather than being a distinct historical period in their own right. But these kinds of ‘modernisation narratives’ – viewing the past as if the only story is the triumphant and inevitable march of all things towards the shiny here and now (more pessimistic forms of historical determinism are, of course, available) – were heavily criticised and fell into decline among historians at more-or-less the same time that the term ‘early modern’, with all its ‘modernisation narrative’ implications, was enjoying its assent.[2] Very odd.

Indeed, since the 1970s one of the most significant developments in historical approaches to the sixteenth and seventeenth centuries has been a desire to excavate the beliefs, culture and actions of contemporaries and to understand them ‘on their own terms’ – in the process often emphasising just how different and distinct, rather than similar and vaguely modern, the period was. Is ‘early modern’ really the best term for capturing this singularity? Perhaps not, but the term was and is widely deployed by cultural historians nonetheless. In fact, Keith Thomas, Natalie Zemon Davis and Peter Burke can all be counted among the pioneers of both cultural history and the term ‘early modern’. END_OF_DOCUMENT_TOKEN_TO_BE_REPLACED

This is the first post in our new Monster Mini-Series on periodisation. Click here for the Series introduction.

There are many different ways to divide the past up into analytical chunks, but some ways are more popular than others. In this post I offer a brief overview of some of the most common periodisations. It is of course a broad brush summary with a tendency to generalisation. Please do flesh it out with your own comments and refinements below the line – we have had a great response to the series on twitter and I will be collating many of these contributions for a later blog.

Starting with the simplest division: if you are short of time, the strongest chronological distinction often appears to be between the modern age, and all the stuff that happened before it. You know, when everyone was blindly superstitious, 99% percent of the population spent their lives covered in sheep poo, there was no electricity, no penicillin, no roads and subsequently a bunch of kings ordered everyone about whilst riding over-mighty dragons. Or something. Sometimes undergraduate ‘survey’ modules are organised along these chronological lines: at Exeter the ‘pre-modern’ module covers c. 500-1750; the ‘modern’ module covers 1750-present. 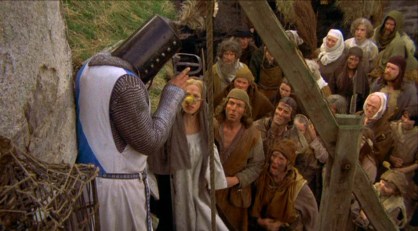 Pre-modernity: knights, witches, muddy peasants and that sort of thing.

Of course this rather oversimplifies things. Europe in 700 didn’t look or feel anything like Europe in 1700. The divide also massively prioritises the last 200 or so years of history and diminishes the previous 1,300. It is a useful shorthand for showing potential undergraduates the breadth of your teaching programme or identifying yourself at a multi-disciplinary event, but not much more.

This is the introductory post to our new occasional Monster Mini-Series on periodisation in history. In a series of related blogs we will be exploring historical chronologies, examining the ways in which we chop up the past into more digestible chunks. We are interested both in how we do this, but also why, and what the consequences are for both how we conceive of the past, and how this in turns effects the organisation and practice of the discipline. The other posts are:

Posts that also engage with the theme: 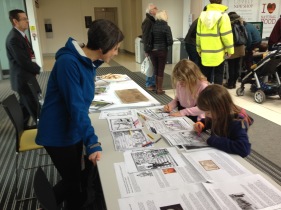 The University of Exeter’s community day: What does early modern mean, and who is this strange horned and hoofed man?

I quite often find myself needing to explain what period of history I work on, and it isn’t always straightforward. For example, my students are often not familiar with the term ‘early modern’ and remain convinced that anything that isn’t modern is ‘medieval’. At the University of Exeter’s recent Community Day, one of the most popular questions from visitors to the ‘Centre for Early Modern Studies’ stand was: what dates / centuries / years does that refer to? (In case you are interested, the other top question was: ‘what’s the devil’ from children colouring in woodcuts of said infernal being).

This is an issue that has a bearing on the many-headed monster too. We self-identify as an early modern blog, and the Monster’s tagline is that we offer “‘the history of ‘the unruly sort of clowns’ and other early modern peculiarities”. Whilst fellow academics might have a grasp of what that means, the blog aspires to reach an audience beyond professional historians, to whom the term may appear rather opaque.

The answer to what ‘early modern’ means is, of course, 1480-1700. Or perhaps 1500-1750. Or maybe 1450-1800. Actually it really depends. Oh, and if you are outside of Europe and North America you might not recognise the term at all, being equipped with a completely different way to think about your national past. END_OF_DOCUMENT_TOKEN_TO_BE_REPLACED

Every year, universities across Britain and beyond place hundreds of advertisements on jobs.ac.uk seeking to appoint historians to academic posts. Although accessing this data is not easy and analysing is far from straightforward, recent listings do provide some potentially useful information about the state of the academic job market for historians.

In my previous posts on jobs, I have focused primarily on the ‘supply side’ of the equation – how many people are completing PhDs each year and how that is changing. It is much more difficult to get hard data on the ‘demand side’ – i.e. jobs available – though I’ve tried various proxies such as the numbers of historians with university posts or the number of incoming history undergraduates. The cohort studies of Warwick and Cambridge PhDs allowed me to link doctorates to academic posts more directly, but that was only a small and probably unrepresentative sample.

The advertisements on jobs.ac.uk allow us to get a better sense of how many jobs are actually listed in a given year. END_OF_DOCUMENT_TOKEN_TO_BE_REPLACED