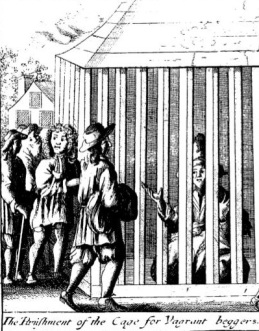 Our knowledge of both literal and figurative imprisonment in the sixteenth and seventeenth centuries is growing rapidly thanks to the on-going work of some outstanding historians and literary scholars. On Friday, a group of them assembled at Birkbeck for a ‘mini-symposium’ on the topic of ‘Writing Prisons: Literature and Constraint in Early Modern England’, where they considered ‘forms of physical, political, and aesthetic unfreedom’ at that time.

The event was organised by Molly Murray, who is currently completing a book on the literature of the prison, and also included short papers from Ruth Ahnert on the correspondence networks of Marian Protestant prisoners; Andrea Brady on the trope of constraint in poetry; Richard Bell on the use of written records by London prisoners and their jailors; and Robert Stagg on how rhyme was conceptualised as aesthetic ‘bondage’ or ‘liberty’. Pleasingly, the audience included scholars such as Vanessa Harding, Susan Wiseman, Molly Corlett and John Levin, ensuring that the discussion that followed was wonderfully wide ranging.

Although I’ll make no attempt to summarise the whole event, it did set my mind whirring and left me with a few particularly strong impressions …

First, imprisonment was everywhere in early modern society. Buildings used for confinement were innumerable, from the famous London institutions like Newgate, Bridewell, the Tower, and the Marshalsea, to the tiny but omnipresent compters, sponging houses, cages, stocks and pillories that could be found in even small settlements. There were also a great many other forms of ‘unfreedom’ such as house arrests used by the crown against troublesome nobles, quarantines shutting up infected houses during plagues, exile imposed on religious or political dissenters, recognisances ‘binding over’ offenders to ‘keep the peace’, and of course the various types of ‘servitude’ experienced by apprentices, servants and slaves.

The trope of imprisonment also permeated vast swathes of early modern literatures. As Ahnert, Murray, Brady and Stagg showed, the number of texts that might be described as ‘prison writing’ was growing quickly at this time, in part because so many famous writers spent time in prison for debt or dissent. Moreover, the metaphor of constraint – with its associated vocabulary of ‘fetters’ and ‘chains’ – was popular among poets, playwrights and other authors, perhaps because so many of them had some contact with the physical institution through family or friends even if they had not experienced it themselves.

Second, despite the prevalence of the prison as a place and an idea, Murray and others very forcefully argued that it was ‘unsystematically constraining’ at this time. There was a distinct lack of agreed penal theory – Was prison supposed to secure, punish or reform its inmates? Most of these institutions were run ‘privately’ by profit-seeking officeholders with much autonomy and each had its own distinctive ‘customs’ and ‘constitutions’, as highlighted by Bell, which led to immense variation in conditions. The individual status of particular inmates – differences in gender, wealth and political importance – brought even more variation.

Such places were extremely porous. Inmates constantly communicated with those outside the prison through messages, visits and – in the case of prisoners’ families – even extended lodging. They loved, disputed, petitioned and evangelised non-prisoners both inside and outside the walls. Ahnert showed the way that Marian religious prisoners created and maintained communities that included fellow inmates, messengers, financial supporters and a wider network of laypeople. The unsystematic nature of early modern constraint also had a literary aspect.  Several speakers noted that it is difficult to define a coherent corpus of self-conscious ‘prison writing’ at this time. Because writing from prison was so common and varied, it was at best a rather incoherent genre rather than a firmly bounded body of literature.

Finally, in spite of the porosity and disorganisation emphasised above, the very real oppression inherent in early modern imprisonment cannot be forgotten or elided. Cold, hard, dark places were the stuff of literary inspiration but they also had a direct physical and psychological impact on their inmates. As Krista Kesselring’s new post explains, many people died in prison through disease or starvation, and others experienced it as an anteroom to the scaffold or the stake. Even those outside experienced the prison through the human-shaped hole lift in their families and communities when a husband, father or neighbour is thrown in gaol. Many literary writers who seemingly ‘played’ with tropes of constraint were responding to the mental distress and damage it caused. 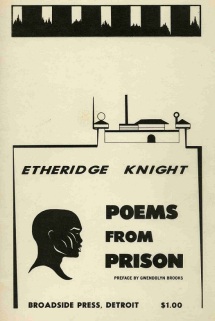 Indeed, all the speakers acknowledged the harsh consequences of imprisonment, with Richard Bell arguing particularly strongly that the use of records and documents by prisoners to resist various ‘injustices’ may have actually reinforced, or at least left uncontested, the hegemony of imprisonment for debt. That is to say, prisons were obviously part of a broader structure of economic, social and political inequality – one which even highly literate prisoners could very rarely challenge directly. Andrea Brady, who works on poetry across a much longer period, gave us a very powerful reminder of this human impact when she quoted the writings of contemporary prisoners in the American penal system.

Another modern example could be Etheridge Knight’s Poems from Prison (1968), written while he was serving an eight-year sentence for robbery in Indiana State Prison. Let’s finish with this:

It is hard
To make a poem in prison.
The air lends itself not
to the singer.
The seasons creep by unseen
And spark no fresh fires.

Soft words are rare, and drunk drunk
Against the clang of keys;
Wide eyes stare fat zeros
And plea only for pity.

Pity is not for the poet;
Yet poems must be primed.
Here is not even sadness for singing,
Not even a beautiful rage rage,
No birds are winging. The air
Is empty of laughter. And love?

Why, love has flown,
Love has gone to glitten.

3 thoughts on “Impressions of imprisonment in early modern England”