In my previous post, I talked about the vital role played by a wider ‘strike culture’ of objects and actions in enhancing the power of labour action, both then and now. Yet focusing exclusively on ‘culture’ risks underestimating the hard structural barriers that worker mobilisation regularly bumps up against.

Although undoubtedly there is ‘power in a union’, there is also a great deal of coercive power held by our employers and the state.

British law is, as far as I can tell, unusually hostile to trade union action, another unhappy inheritance from the Thatcher years. This means that employers can threat – and implement – all sorts of nasty things that seem like they ought to be illegal but are actually within the bounds of the law.

The biggest shock for me was discovering that many universities were threatening to dock some or all of their staff’s wages for ‘action short of a strike’ (ASOS) a.k.a. working to contract. There has been a strong push from the strikers and their allies to get these universities to reverse these policies, with much success. But at the time of writing, eight institutions (Bristol, City, Heriot-Watt, Leeds, Liverpool, Royal Holloway, Salford, and Surrey) were still threatening this.

Even more thorny is the problem of the pensions themselves. Suffice to say the issue is complex, but it is clear enough that the Pensions Regulator and various official rules have made it more difficult to get a clear sense of how much room for negotiation is actually available. As has been expertly discussed by Josephine Cumbo and Michael Otsuka, while these formal structures are not entirely rigid or immovable, they still impose very real boundaries on the options available.

Three or four hundred years ago, workers taking action encountered some similar problems. The economy was of course very different, with very few large-scale employers and many more household-sized economic units. Nonetheless, as I noted in my previous post, there were still ‘strikes’ and other labour disputes. And in most of these conflicts, the broader legal context favoured ‘masters’ (employers) over their workers.

The so-called Statute of Artificers (1563) provided a tool that was occasionally used by journeymen to force employers to only hire workers who had served a full seven-year apprenticeship, thus enhancing the journeymen’s bargaining position. Yet the same statute could also be used to impose ‘maximum’ wage rates on many types of workers.

In other disputes, employers used the 1548 law against ‘conspiring’ to enhance prices – meant to offer protection to consumers – as weapons against workers asking for higher rates. Indeed, the rhetoric used by masters is full of complaints about ‘conspiracies’, ‘confederacies’ and ‘combinations’, all of which might be designated as illegal cartels.

By the eighteenth century, groups of masters were using their considerable political power to get statutes passed that restricted worker’s rights in specific industries. This began in 1721 with the journeymen tailors of London, whose employers successfully petitioned parliament for a new law to criminalise their strike for a shorter day and higher wages. Less than a year later, a strike by the tailors of Cambridge ended up in the Court of King’s Bench. Notably, the judges not only ruled against the workers in this case, but also stated that the statute was unnecessary: ‘It is not for refusing to work, but for conspiracy that they are indicted, and a conspiracy of any kind is illegal’. In other words, both statute law and common law were weighted against labour by this time. 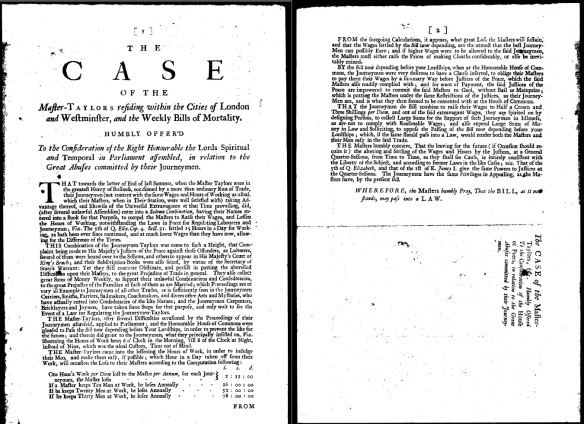 The master tailors of London present their ‘Case’ to Parliament for a new law against the ‘Solemn Combination’ among their journeymen (c.1720)

Over the decades that followed, pressure from employers led to parliament passing ‘combination acts’ against workers in other industries including weavers and woolcombers (1726); dyers and hot-pressers (1749); silk-makers (1773, 1792); hatters (1777); and papermakers (1796). This culminated in the Combination Act of 1799/1800, which applied to all ‘workmen’.

What all these statutes and court rulings had in common was the underlying assumption that workers should not be able to collectively against their employers. Even when MPs or judges sympathised with the grievances of the strikers, they still sought to tame the power created by solidarity among the ‘lower orders’.

Thankfully the situation in 2018 is not the same as 1799. Our union is protected by law and our right to strike is mostly intact.

But we would be very short-sighted to ignore the wider regulatory and legal context, accrued over many years and influenced at every point by ‘external’ factors such as partisanship, ideology and sectional interests. We are unlikely to find much support in a government that seems dedicated to dismantling the welfare state.

The only way to counteract these forces is through our own collective action. The strength that comes from solidarity can allow us to push against these structures, to bend them and perhaps occasionally even break them.

We should not be afraid to target seemingly immovable rules in the hope that they are not as rigid as they first appear. There is power in a union.