[In our series ‘A Page in the Life’, each post briefly introduces a new writer and a single page from their manuscript. In this post, Emily Vine examines the daily records of a remarkably busy woman in late eighteenth-century London.]

From 1773 to 1830, Anna Margaretta Larpent, the wife of John Larpent, Examiner of Plays, kept a diary of her daily life divided between Newman Street, London and Ashtead in Surrey. She recorded the time she woke up and went to bed each day, the meals she ate, the details of the books she read, the letters she wrote, her daily prayers, her time spent sewing and shopping, her family business, and her significant contribution to her husband’s work in theatre licensing. The delight is in the detail; even in predictable repetitions such as ‘Rose at 8. Breakfasted. Prayed’, Larpent is brought to life on every page.

In the first week of February 1792, she recorded the following:

February 1st Wednesday    Rose at 8. Breakfasted. Settled much family business above to London for the Winter, came there to dinner. Our Waggon followed us. We dined near 5. Evening I wrote to Farquhar concerning my sister … to miss Garmeaux on the business of her his Lord Neice coming to town &c.  Tea rest of the Evning worked &c. Tired.

February 2nd Thursday   Rose at 8. Breakfasted. Very busy in family matters and teaching myself. Received the Miss Fanshawes dressed. Evening made a White Silk petticoat then tea. I then red through the Critical Review &c. prayed went to bed after.

February 4th Saturday    Rose at 8. Prayed. Red part of Christie’s letters. Breakfasted. Taught George to spell, read & Latin. Drove to mrs Jeffrey’s saw her then to Mrs Larpent Kennington Green. Only returned to dinner. Eveng worked part of a flounce for my sister. Then wrote to Mrs Pickering about getting a Servant. Rest of ye Eveng Chatted prayed to bed at 11.

February 5th Sunday     Rose at 8. Prayed. Breakfasted. Attended divine service at St Anns. Mr Eten preached on Providence, on the Gospel System as proving that providence. That dispensation was finely traced – returned home. Recd. Mr and Mrs Planta, Mr S. Sargent. Mrs Belson & her family. We then went out. Saw Miss Fanshawe, Miss Buchanan and Mrs Beaver. Returned home to dinner. Dined. Eveng till tea red the Bible. Psalms. Corinthians. & 2d – through & two Chapters of Matthew. Then copied the journal of a fortnight past in this book. Prayers. To bed at 11.

On this page we see a snapshot of Larpent’s life over a single week, focused on the life of her family, rather than a record of London news or events of national importance. While Larpent moved in important circles, worked as a theatre censor and had an eventful social life, it is the minutiae of her daily routine, the details of her time at home and her solitary reading which she devotes the most space to.

As she records her daily goings-on within the diary, so too does diary-writing shape her routine. She sets aside time to write an entry every day. She frequently breaks the fourth wall of the diary, reflecting upon her method of writing the very journal the reader is holding, noting time spent copying out past entries from a different book.

What is most striking is Larpent’s education. She reads French, Italian, and Latin and appears to spend a couple of mornings each week teaching these languages to her son George. She uses the journal to log details of the books she reads and her responses to them, immersing herself in volumes as diverse as a recent history of the French Revolution and The Critical Review. She structures prayer into her daily life; praying first thing in the morning or before she goes to bed, reading the bible, (Corinthians, Psalms, Matthew) and when, on the Sunday, she hears a sermon a short walk away from Newman Street in St Anne’s Soho, she critically engages with the content of it.

As well as dividing her time between her London and Surrey homes, Larpent records visiting friends across London and its environs, travelling four miles down to Kennington Green and frequently receiving visitors in her own home. While some scholars have suggested that Larpent had been stifled by her husband, this page gives the impression of an independent woman immersed in London society, a woman who combines the traditional roles of running the household with her involvement in the male-dominated theatre business, a woman of learning and agency.

Yet it is also the diary itself that helps fashion Larpent as a woman of learning and agency. The journal is a tool that permits her to reflect upon the books, sermons, and people she encounters; it both documents and facilitates her introspection, her desire to record and self-edit. While the process of writing fulfilled Larpent’s desire for self-improvement, so too has the end product solidified her place within the historical record. 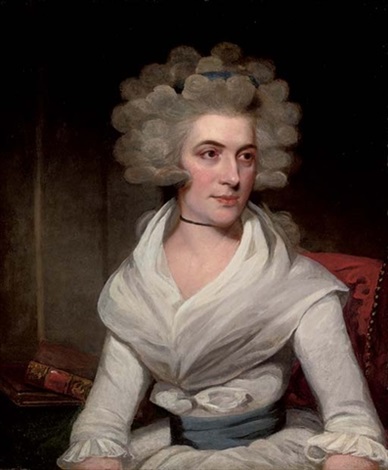 5 thoughts on “A Page in the Life of Anna Margaretta Larpent: Reading about Revolution and Writing about Writing”