This post is part of our #AliceClark100 Online Reading Group. In it Jane Whittle offers some reflections on the second main chapter of The Working Life of Women in the Seventeenth Century, on ‘Agriculture’. Jane is a Professor of Economic and Social History at the University of Exeter. You can access the book here. 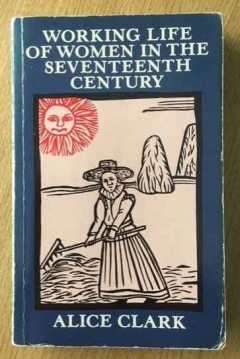 I’m reading the chapter in my 1982 edition of Alice Clark (the only history book I stole from my mother’s bookshelves), complete with a woodcut of a woman haymaking on the cover (although this image has been edited to remove the couple canoodling in the background which is present in the original below). Is this deeply significant? Probably not …

Alice Clark’s chapter on agriculture offers a microcosm of the book’s overall argument. As she concludes on the last page of the chapter, the ‘review of the whole position of women in Agriculture at this time, shows the existence of Family Industry at its best, and of Capitalism at its worst’ (p.92). As explained in her ‘Introductory’ to the book, she gives Family Industry and Capitalism quite precise meanings. Family Industry is ‘the form in which the family becomes the unit of production of goods to be sold and exchanged’ (p.6); whereas Capitalistic Industry (or Capitalism) is ‘the system by which production is controlled by the owners of capital, and the labourers or producers, men, women and children receive individual wages’ (p.7). For Clark, Family Industry, which in the agriculture chapter is represented by the lives of farmers, husbandmen and their families, represented everything that was good about the seventeenth-century economy. On the other hand, Capitalism, illustrated by the experience of wage earners, represents everything that was bad in what was to come. 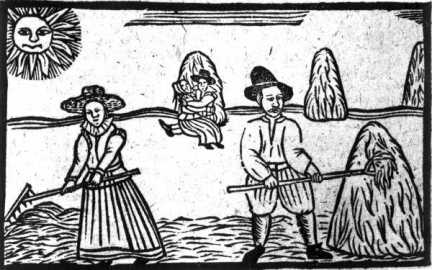 The great strength of Clark’s work is the range of primary sources she uses and the ingenuity with which she integrates them into her argument. In her discussion of farmers and husbandmen (she doesn’t comment on the awkwardness that these male titles are being used to discuss the experience of their wives – there were no female equivalents) she uses farming advice books (Fitzherbert), diaries and autobiographies (Ralph Josselin, Samuel Pepys, Adam Eyre, Peter Heylin, Adam Martindale), Quaker testimonials, household account books, the farming book of Henry Best, the travels of Celia Fiennes, and descriptions of servants’ work from wage assessments. With this evidence she demonstrates women’s active involvement in managing the business of the farm (keeping accounts, organising leases, buying and selling produce), and notes that there was ‘hardly any kind of agricultural work from which women were excluded’ (p.62).

Historians have progressed surprisingly little beyond this approach in the last hundred years, mostly adding new examples of the same genres of documents or rediscovering Clark’s sources. Even the recent advances of using incidental evidence from court documents to reconstruct women’s work patterns have their precursor here – Clark gives an example of farmers’ wives riding to market, taken from the Somerset Quarter Sessions Records. What is missing from this picture? Well, Clark made no use of probate records. Probate inventories make it clear that not all women could have done all types of work and allow us to explore regional and local differences in household economies. Wills (along with various court records), demonstrate that many married couples did not run their farming households as equal partners in full agreement. Farming relied on possessing land and women suffered significant disabilities in their access to land and other rights to property – some husbands took full advantage of this, while others sought to mitigate the effects for their wives and widows.

The section on wage earners is altogether more problematic. It is not really about agriculture at all, but a discussion of the living standards of the labouring poor. Clark defined husbandmen as those with between seven and as little as half an acre of land, so her section on wage earners concentrates on those who were completely without land and wholly dependent on wages. She looks at the level of wages using wage assessments (which set legal wage rates), churchwardens’ accounts, and examples from household account books; and examines expenditure on diet using eighteenth century evidence from hospitals and workhouses, as well as exploring the cost of building and renting housing. She concludes that wages were not sufficient for survival, and as a consequence large numbers of labourers’ children died of malnutrition, which was why labourers’ families were so small. For further evidence about the living conditions of wage earners she relies heavily on evidence from the quarter sessions, which include petitions to build cottages and disputes over legal settlement, providing a uniformly negative picture. Anyone interested in labourers’ standards of living in early modern England should read Craig Muldrew’s Food, Energy and the Creation of Industriousness (2011), which presents much more positive conclusions about labourers’ living standards.

Many of the issues raised by Clark remain open to debate: what proportion of the population could be classed as wage earners by her definition in the seventeenth century; how exactly did such families manage to survive? But the demographic studies of Peter Lastlett, Tony Wrigley and Roger Schofield have shown that starvation-induced infant mortality was not an everyday reality in rural England. Small family size had other causes: poor economic prospects led to late marriage, and breast-feeding suppressed women’s fertility. Clark, perhaps with the nineteenth century in mind, assumes large families were the norm. The dire circumstances she evokes of women lacking the nutrition to breast feed, and of the few children who did reach maturity being ‘crippled in mind and body (p.87)’, may have been the reality for some, but not the great majority of wage earners in the seventeenth century.

Nevertheless, in contrast to many more recent historians, Clark viewed poverty in the seventeenth century through the eyes of women, and with a fierce empathy for their circumstances. She argues that ‘the full misery of the labourers’ lot was only felt by the women’ (p.86). Men who were unable to support their families could leave; women did not desert their children, but nor could they support their families fully from wage earnings. It is this viewpoint, and the richness of the evidence she marshals, that makes her work so important 100 years after it was first published.