Hundreds of people complete a doctorate in History each year at UK universities, a process with huge implications for the strength and sustainably of academic history as a discipline. This figure has been rising gradually but fairly consistently over the past couple decades, from around 250 in the late 1990s, to around 550 in the late 2000s, to a peak of more than 750 in 2016.

However, in response to each of these posts, readers have rightly asked about the motives of those pursuing doctorates. It is obvious that not all of those 700 or more new PhDs want to become lecturers, so the job market is thus presumably less disastrous than the headline figures imply. But the problem is that it is difficult to know whether this proportion is substantial or negligible.

Thankfully, Andy Burn not only brought it to my attention that there is a UK-wide survey of current PhD students about this, but also very generously turned the raw data into something useable for me. This is the ‘Postgraduate Research Experience Survey’ (PRES) and it asks all sorts of questions, including two about motivations. The highest recent response rate was in the 2017 survey and that’s what I’ve used here, though the proportions were similar in the 2018 survey.

So, what are the results for History?

Almost half of doctoral students in History, when asked directly why they chose to do a PhD, said that they were motivated by their interest in the subject (48%). This is a much higher proportion than in most other disciplines such as clinical medicine (30%), biology, chemistry or computer science (35%), though it is similar to literature (43%), classics (48%) and, intriguingly, mathematics (48%). It is only lower than philosophy (57%).

Less than a quarter said that their ‘main motivation’ was an academic career (22%), lower than the average across all disciplines (27%), though in the same general range of most humanities subjects (20-30%). Perhaps surprisingly, subjects like medicine and health, comp sci, architecture and even ‘business and management studies’ had higher proportions than history.

An optimistic reading of the answers to this question would be that most people who take History PhDs are doing it for the love of history and only a minority want an academic job. If so, this is good news both for those pursuing academic jobs – because there would be less applicants per post – and for the remainder – because they will not be disappointed about the lack of academic jobs available.

However, the next question on the survey suggests this optimistic reading may be too rosy. When History PhDs are asked what type of career they ‘have in mind’ for their future, the proportion thinking of a lectureship is much higher, reaching almost precisely 50 percent, and another six percent want a ‘research career in higher education’. A further 28% are ‘unsure’ or ‘other’. Indeed, the number definitely not envisioning an academic career is only 16%. So, although we can be sure that more than 100 of the 700 or so new History PhDs each year are not planning to enter the academic job market, it seems like a significant majority – perhaps 400 to 500 – will be applying for university posts. 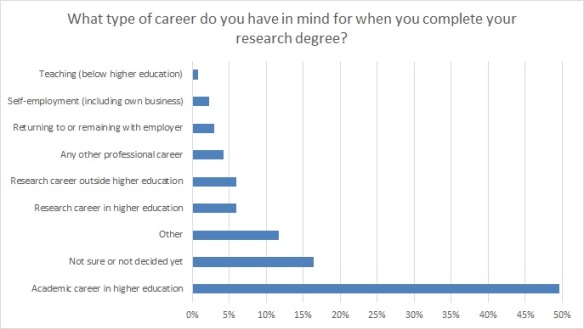 When compared to other disciplines, the 56% of History PhDs who are definitely aspiring academics is a high proportion. The average across all subjects is 50%, with 39% aiming for an ‘academic career’, plus another 11% for a ‘research career in higher education’. It is higher in literature (69%), philosophy (69%), law (63%) and economics (58%), but unsurprisingly lower in medicine (40%) and other STEM subjects. Presumably ‘alt-ac’ pathways are rather easier to envision among the latter group.

I’ll leave it to others to decide whether they think this data offers ‘optimistic’ or ‘pessimistic’ news for recent and current PhDs. What is absolutely clear is that doctoral students in history care passionately about their subject, whether or not they hope that it will lead to an academic career.

Update (27-06-19): In response to a question from Charlie Taverner on twitter, Andy Burn  provided a more detailed and easily digestible look at the data across disciplines. As Andy says, ‘it looks like the proportion wanting an academic *or* research career was fairly consistent across subjects at 60%-70% (with the exception of medicine and psych, probably due to clinical doctorates). I guess the job market for research-only jobs needing PhDs determines the mix. Research-only jobs (in HE and outside) are much bigger in lab-based sciences and smaller in arts. A decent chunk in every subject are undecided. ‘Other’ seems to vary more — as a commenter on the blog says, some of these might be retired.’ That particular subgroup seems to be largest in History, at 10.8 percent.

3 thoughts on “Why do a PhD in History? A look at the data”