Over ten weeks in April, May and June this year, as a pandemic raged across the world and most of us found ourselves confined mostly to our homes, I taught one of my favourite modules. It’s called ‘To See the World in a Grain of Sand: Reading and Writing Microhistories’, and it’s open to most of the MA students in my department at Birkbeck.

There’s no obvious reason why about twenty postgrads would sign up to do an optional module focused on theories and methodologies, especially as most of them were living in locked-down London, one of the hardest hit cities in the world. But they did, and I’m glad they did.

My pitch was simple:

How much can we learn about the past through the story of a single person, place, object or event? For example, what can the inquisition of a heretical Italian miller tell us popular beliefs in the age of Reformation? Since the 1970s, historians have attempted to show that such ‘microhistories’ can in fact reveal much about the grand sweep of history. By narrowing their focus to magnify the small, the particular and the local, these scholars have proven that studies of seemingly inconsequential subjects can have a major impact on our understanding of history.

This module will examine both the microhistories themselves and the extensive scholarship that has been produced explaining, refining, justifying and critiquing this approach. In most weeks, we will examine a particular microhistory. We will read several classics from the genre – including Carlo Ginzburg’s The Cheese and the Worms, Natalie Zemon Davis’s The Return of Martin Guerre and Martin Darnton’s ‘The Great Cat Massacre’ – as well as more recent innovative works of ‘global microhistory’ and ‘object biography’. The primary focus will be on the period c.1500 to c.1800, but there will also be sessions on medieval and modern topics. The module will include at least one session with a scholar discussing their own experience of writing microhistory and a workshop based on a selection of primary sources, where we will discuss how we might write our own. In addition, by the end of the module, you will have explored the sorts of topics, methodologies and primary sources that could serve as a basis for a successful dissertation.

For whatever reason, students enrolled, so the module ran despite the ongoing pandemic. It was, of course, taught entirely online. And yet, from my perspective and according to the students’ anonymous feedback, it was still a success overall. I’ll admit that I was slightly surprised at how well it went, and how much I enjoyed teaching it.

I’ve written before about microhistory on the blog: size and scale; origins and definitions; recent developments. So, I thought I’d briefly set out what I thought worked, and I’ve included a copy of the module handbook (syllabus) at the end of the post in case anyone else wants to give it a try.

For a few of us, questions of research methodology and historiographical theory are inherently interesting. But I think it would be fair to say that most students – even postgrads – need a bit of convincing. The pitch above tries to get around that by highlighting the fact that studying microhistories means reading about some truly weird and wonderful things. Nonetheless, much of our discussion focused squarely on seemingly arcane questions about typicality, record-linkage, agency and genre. Indeed, I made a point of trying to not talk too much about the ‘content’ of these microhistories (e.g. ‘What does The Return of Martin Guerre tell us about marriage in sixteenth-century France?’) in favour of questions about how and why these scholars write these microhistories. I found the students adapted to this very quickly and were soon talking passionately about these issues, but they inevitably sometimes found some of the technical and conceptual terminology difficult.

Relatedly, there is the problem of our uneven knowledge bases when ranging across a long chronology and over several continents. I’ll admit that – as an early modernist – I was not hugely confident on the weeks when I was teaching the microhistory of a thirteenth-century French dog saint or a twentieth-century Indo-Guyanese indentured worker. I’m sure many of my students felt the same. We managed though, and by focusing the discussion on the craft of microhistory rather than the past itself, this ended up being less of a hindrance than I’d expected.

Finally, the online format was a huge challenge from the very beginning. This was a new experience for both me and the students. The first video seminar was particularly ominous, because my connection dropped out several times and – even when working – the audio quality was poor. Thankfully, that seems to have been the worst technical problem that we encountered as a class. More difficult were the problems of access and reliable equipment encountered by individual students, which made participation difficult for some of them. Likewise, the shutting of the library due to the pandemic meant a scramble to find online material or digitise it at short notice, which was only partly successful. These are just some of the wider massive and ongoing concerns about online teaching, but we can’t avoid them as we prepare for the new academic year.

The appeal of ‘Microhistories’ was helped considerably by the fact that it was a collaborative enterprise. Although I did most of the sessions, three of my brilliant colleagues at Birkbeck each ran one session as well: Filippo de Vivo on global microhistory, Kat Hill on object biography, and Julia Laite on ethics and emotions in modern microhistory. They each brought huge amounts of expertise on these specific subjects which I sorely lacked, and also helped to break up the routine of weekly classes by presenting the students with new perspectives, questions and activities. In each case they were also able to talk directly about their own microhistorical research, giving the students direct insight into how this works in practice.

Two of the challenges listed above – the methodological focus and the huge range of ‘content’ – turned out to be opportunities as well. There is less ‘gatekeeping’ needed when talking about microhistory. This is partly because the classics of the genre are written in a reasonably lively, accessible way. But it is also because you don’t need to know anything about, for example, sixteenth-century France to have an intelligent, productive conversation about Davis’s The Return of Martin Guerre, thanks to the fascinating methodological questions it raises. This means that it is easier for students to jump into the discussion, even if they’ve never studied that particular period or place before.

The online format turned out to have some real advantages. I won’t attempt to discuss them in detail here, as the side effects of online teaching deserve a more substantive analysis than I can provide right now. I tried a few new things, including a twitter hashtag, #Microhistories, that I used to link up various things I came across on twitter. In addition, one online aspect that did work particularly well is the pre-seminar online discussion forum, where each student responded to one or two questions ahead of the live video class. As one student put it in their anonymous feedback:

I can’t emphasize enough how nice it was to have a decent understanding as to what topics would be discussed and what opinions might be brought forward before the seminar started with the group. It meant that I could do some further reading / googling of things I maybe didn’t quite understand before I came to the discussion and I felt like I kept up with the conversation more so than I would had the discussion forum not existed and I turned up to a seminar without knowing what would be discussed.

I suppose it would be possible to have an activity like this in a standard face-to-face class, but I was only prompted to try it thanks to the shift to online classes, and I’m very glad that I did. Perhaps particularly with microhistories, it is really valuable for students to have the chance to try out their ideas before the actual seminar itself. 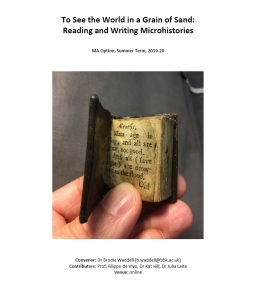 Although I had run this module once before, this time was novel in all sorts of ways. We had to adapt as we went, adjusting bits and pieces from week to week to fit the extraordinary circumstances we found ourselves in. There was, however, a module handbook that we started with.

The handbook includes some introductory material, questions and readings for each week. It also includes a list of broader readings on microhistory at the end and, my favourite bit, a list of scholarship that might be fall under the label ‘microhistory’. I already have a list of new stuff to add before running the module again, but you can download the current version here: Waddell, Microhistories handbook 2019-20.

I decided to finish the module with a simple assignment that I hoped would get them to use some of what they’d learned without imposing too much work in the final week. I asked them to find a primary source online, and pitch a book-length microhistory based on it. I asked for a couple hundred words, but I was just so proud of the amazing invented books they came up with that I ended up trying to condense each pitch into a sentence so that I could tweet them out to the world.

So rather than conclude with some profound thought about the nature of microhistory or the exigencies of online teaching, I’d like to leave you with my students’ wonderful ideas, gathered in this #Microhistories thread. Each one is a little gem of a story, waiting to be told.

The first few microhistories pitches from my students, continued here.